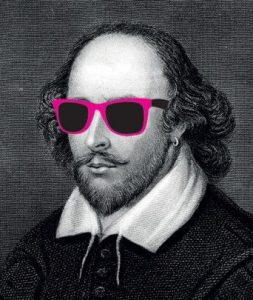 Shakespeare has become a defeatist challenge, or a bore, for many students today when studying it in high school English classes. But Shakespeare was never meant to be read – it was meant to be spoken. Heard. Seen! In this one-week course, we will demystify history’s most prolific playwright by focusing on it the way he always meant for us to. We’ll tackle the language, the verse, and the meter, of course, but we’ll also explore how it should be spoken to eliminate the intimidation that frequently surrounds the work. We have the tendency today to think of Shakespeare as an elevated artform, meant for the highly educated and upper classes, but that’s not what he was about. He wrote for largely uneducated audiences in often poverty-stricken areas. His writing had to capture their attention and hold it, immediately. As a result, his stories are filled with adventure, fantasy, mischief, and hijinks. This is the real world of Shakespeare, and the world that I’d like to open our students up to. As the tragedies are often covered in schools, we’ll primarily focus our attention on a comedy. Hopefully students will leave the class with a new appreciation for Billy Shakes, excited to tackle the unique challenges his works present.